25 years ago
• The controversial running of the 113th Preakness Stakes drew commentary from retired Maryland Horse editor Snowden Carter. The classic was won by Secretariat’s son Risen Star at the expense of Kentucky Derby-winning filly Winning Colors, who was pressed early in the race by the Woody Stephens-trained Forty Niner. 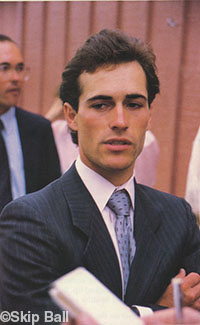 “All of a sudden Woody Stephens is getting hate mail. The grand old man among horse trainers was an American hero going into the Preakness, and now he’s a bum–all because a filly he doesn’t train couldn’t coast on the front end as she had done in the Derby.

“Woody’s fall from grace isn’t deserved. . . To my mind Wayne Lukas and Gary Stevens did more to get their filly beat than did Woody. Lukas. . . was supremely confident in his belief that no 3-year-old could outrun his filly for the lead. And then in pre-race talk he added that if he was wrong, it didn’t matter because Winning Colors didn’t have to run on the lead anyway.
“What it came down to was that this was a real horse race with both jockeys (Stevens and Pat Day) doing their best while committing no fouls. That neither Winning Colors nor Forty Niner could survive the backstretch duel is understandable. Things like this happen ever so frequently–it’s one of the intriguing aspects of horse racing.”

• Pimlico unveiled the “Preakness Village,” a portion of the infield featuring corporate tents where guests could view events from the turf course’s inside rail.

• The last time the Pimlico Special had been run, Jimmy Croll saddled Sharpsburg to finish second to Vertex in 1958. Three decades later, Croll sent out Bet Twice for the newly revived Pimlico Special and had a better outcome, as Cisley Stable and Blanche Levy’s classic winner turned back one of the finest fields of older horses ever assembled at Pimlico. The 1987 Belmont Stakes winner overpowered Lost Code to win by three-quarters of a length.
The six Special starters had combined earnings of nearly $12 million and included the previous year’s Kentucky Derby/Preakness winner Alysheba, who wound up fourth.