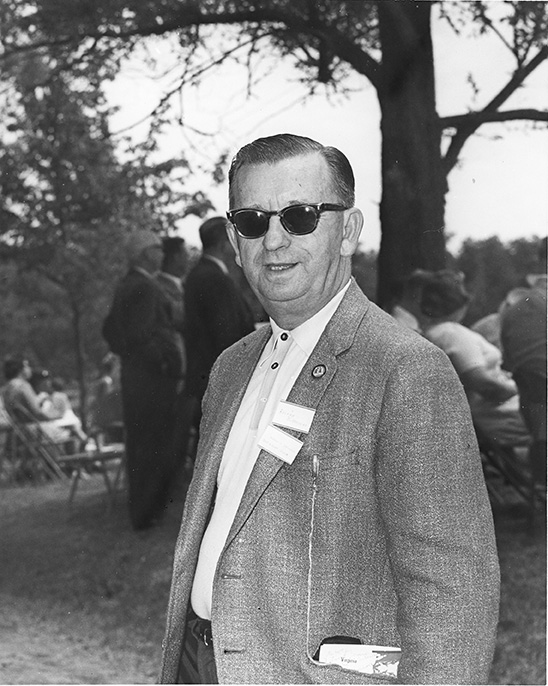 By the time I met Raleigh Burroughs, he was already in his 80s but, as a man once observed about a different elderly friend of mine, he was “a peppy little guy.” He had a natural wit and a sharp memory, and he enjoyed entertaining me with tales of Maryland racing that, while likely stale for most long-time Marylanders, were all fresh to me, being a new resident.

Growing up near Saratoga, I had often observed Humphrey Finney at Fasig-Tipton’s yearling sales, but had no idea about his Maryland background. The fact that Finney, Snowden Carter and Raleigh had been the only three editors of the Maryland Horse magazine in a half-century of that esteemed journal seemed to raise it, and the MHBA, to a high prestige level. When I mentioned this to Raleigh, he modestly discounted his stint as editor as that of “mere placeholder” between “the great Humphrey Finney and the great Snowden Carter.”

The year after I was recruited to Mary­land to put together the Maryland Million organization, I was asked by the MHBA board to succeed Snowden Carter, whereupon the two corporations were brought together in one office under one executive. When time came for the retirement dinner for Snowden, I phoned Raleigh in Florida and invited him to come to the event. He declined so I asked if he might at least write a little something. He said, “I will write a poem for the occasion on one condition; you must agree to read it out loud at the dinner.”

Raleigh’s verses, in spite of my oration, brought the house down. I have tried to remember the words but there was only one copy, which I gave to Snowden. After 30 years, I recall only a single couplet. In the 1960s, Raleigh had been talked into investing in a broodmare owned by Snowden. She was plagued with four abortions in five years and as Raleigh’s poem explained, “Every morning there to greet us, upon the lawn another fetus.” Attendees who hadn’t yet met their new executive found me charming, due entirely to Raleigh’s wit. Even months later, folks remarked to me about how much they had enjoyed that recitation of ‘my’ poem.

In 1977, A.S. Barnes and Co. published a book by Raleigh simultaneously in the U.S. and in England called Horses, Burroughs, and Other Animals. Filled with stories of folks long gone, and of places whose character has changed or, like Bowie, no longer exist, the book is fun to read alone for the multitude of distinctive Burroughs quips sprinkled throughout:

“The horse has always been an important factor in my life, though few horses are aware of this. Even the ones I owned didn’t know it. They thought they belonged to my partner, because he massaged them, showed them to their rooms, and fed them vitamins. If the horses realized that I was paying for the vitamins, they had a mighty funny way of showing it.”

“Psychiatrists paint an interesting picture of the compulsive gambler. He takes time off from his work. He is careless of the family welfare, he borrows to finance his wagering, and he gambles to escape worry. If he has an argument with somebody or feels frustrated, he goes out and gambles. He celebrates good fortune by gambling, and winning builds up his ego. It sounds like a wonderful life!”

“Anyone who writes a book on racing and finds an empty page in the back adds a glossary. . .

“Suffice it to say, anyone who is totally ignorant of the terms of the Turf and hopes to stay that way will find considerable help in this ‘dictionary’ [a few random selections]. . .

“STARTER – Two jiggers of vodka in her iced tea. That ought to get the show on the road. ASSISTANT STARTER – One more jigger. CHUTE – Expression used by trainer when jockey goes outside instead of inside. Example: ‘Oh, chute!’ HOCK – Secure a lien on a valuable piece of property in order to take advantage of a sound investment opportunity at, say, six to one. PHOTO FINISH – The thing that gives the race to the other horse. GOES TO PIECES IN STRETCH – What happens to an emotional bettor when his horse dies at the sixteenth pole. RACING COMMISSIONER – A dear friend of the Governor.”

During the late 1980s while in Florida for meetings, I made several trips to Homosassa Springs to visit Raleigh, who remained mentally sharp, even after 1991 when he turned 90. He gave his last public speech in Ocala for a small group of state association executives who could not have been more enthusiastic. I bought the last box of his books from him, and we gave them out now and then as tokens of appreciation to friends of the MHBA. On one visit, he said his horoscope recommended turning to someone older for advice, and he lamented, “Where am I going to find someone older?” (In truth, Raleigh was a friend of Fred Hooper’s, a Kentucky Derby-winning owner who actually was four years older and ended up outliving Raleigh by two years.)

On my last visit in the early 1990s, Raleigh insisted on paying for my lunch at a seafood café on the canal near his home, where I saw my only manatee. He said he really loved that restaurant, not so much for its food as for the waitress who doted on him. “She’s nice to me,” Raleigh said, and then added, “Besides, she’s one woman who looks as good walking away from you as she does coming toward you, if you know what I mean.” I laughed at this crack from a nonagenarian and asked, “Have you told her that?” “Oh, sure,” he replied, “Several times.”

There cannot be many who ever loved all facets of the horse business for as long or with more genuine passion than Raleigh. He used to say, “People have to understand that you can’t learn the horse business overnight. It takes weeks.” He also loved people and life; I wish I had known him longer. The recognition of him as a unique turf writer is wholly deserved.