Heartlight No. One: A champion with connections 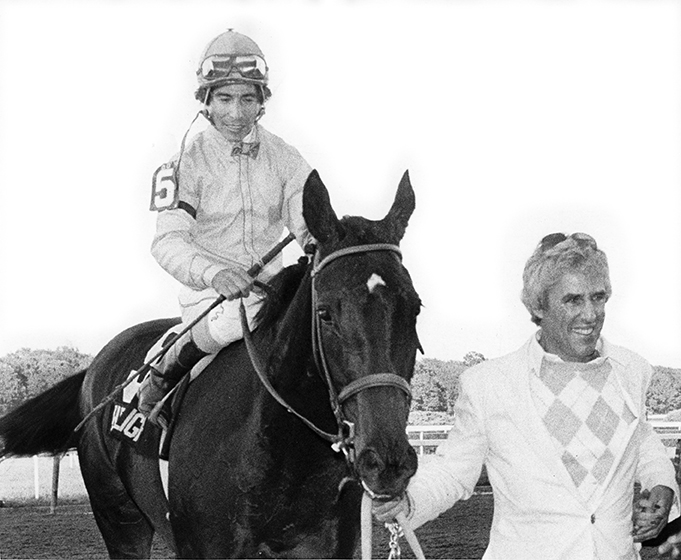 In the 20th century, 63 runners bred in the Mid-Atlantic region were named national champions. Mid-Atlantic Thor­oughbred takes a look each month at one of those luminaries.

The first Mid-Atlantic-bred filly to earn an Eclipse Award for her 3-year-old season was Acad­emy Award-winning composer Burt Bacharach’s Heartlight No. One.

The Maryland-bred daughter of Maryland sire Rock Talk made her case on both coasts in 1983, her only season of competition, while winning five straight from seven starts.

Bred in the name of Bacharach’s Blue Seas Music Inc., Heartlight No. One was named for her owner’s hit song “Heart­light” which incidently didn’t quite make it to No. 1 on Billboard’s Hot 100 Ratings (it rose to third).

The filly, the first for her dam Icantell (by Tell), was foaled at Dennis Kamber’s Roundabout Farm in Poolesville, Md., although she grew up at Country Roads Farm in Charles Town, W.Va. Bacharach’s former business manager Alfred Braunstein owned the farm and leased it to Vinnie and Suzanne Mos­carelli.

Heartlight No. One made her debut at Santa Anita in January for trainer Pedro Marti, a former assistant to Laz Barrera. Ridden by Bill Shoemaker and sent off as favorite, she finished third.

It was five months until she reappeared, this time ridden by Laffit Pincay, who piloted her the rest of her career.

Bacharach asked “Heartlight” crooner and song collaborator Neil Diamond to sing to the filly in the paddock prior to her races.

She broke her maiden by 7 lengths at Hollywood Park over older runners, came back five weeks later to take the Grade 1 Hollywood Oaks by 12 lengths, and in her first start on turf, at Del Mar, she won a 1 mile allowance by 61?2 lengths. She captured the Del Mar Oaks-G2 next, also on the turf, by 31?2 lengths, before traveling east for the Grade 1 Ruffian Handicap. Facing older mares for the first time in stakes competition, she defeated Mochila by a length.

In her final start, the Grade 1 Beldame at a 11?4 miles, she ran on the lead and fought to the wire, missing by a head to year-older Dance Number.

Back in training at 4, she never got to start when sidelined by injury and illness. Retired as a broodmare, she failed to produce a stakes performer, and persistent colic attacks eventually claimed her life at 18. She is buried at Valkyre Stud in George­town, Ky., where she resided in her later years.