Despite eight consecutive victories and 11 overall, all at his home track, the West Virginia-bred gelding Runnin’toluyva had something to prove in the most lucrative race of the year at Hollywood Casino at Charles Town Races.

A little more than six months after a smooth front-running score in the $300,000 West Virginia Breeders Classic for state-bred runners, Runnin’toluvya was asked to take on the challenge of the $1 million Charles Town Classic, a Grade 2 event that has attracted its share of big-name invaders with previous wins at the top level of United States racing. 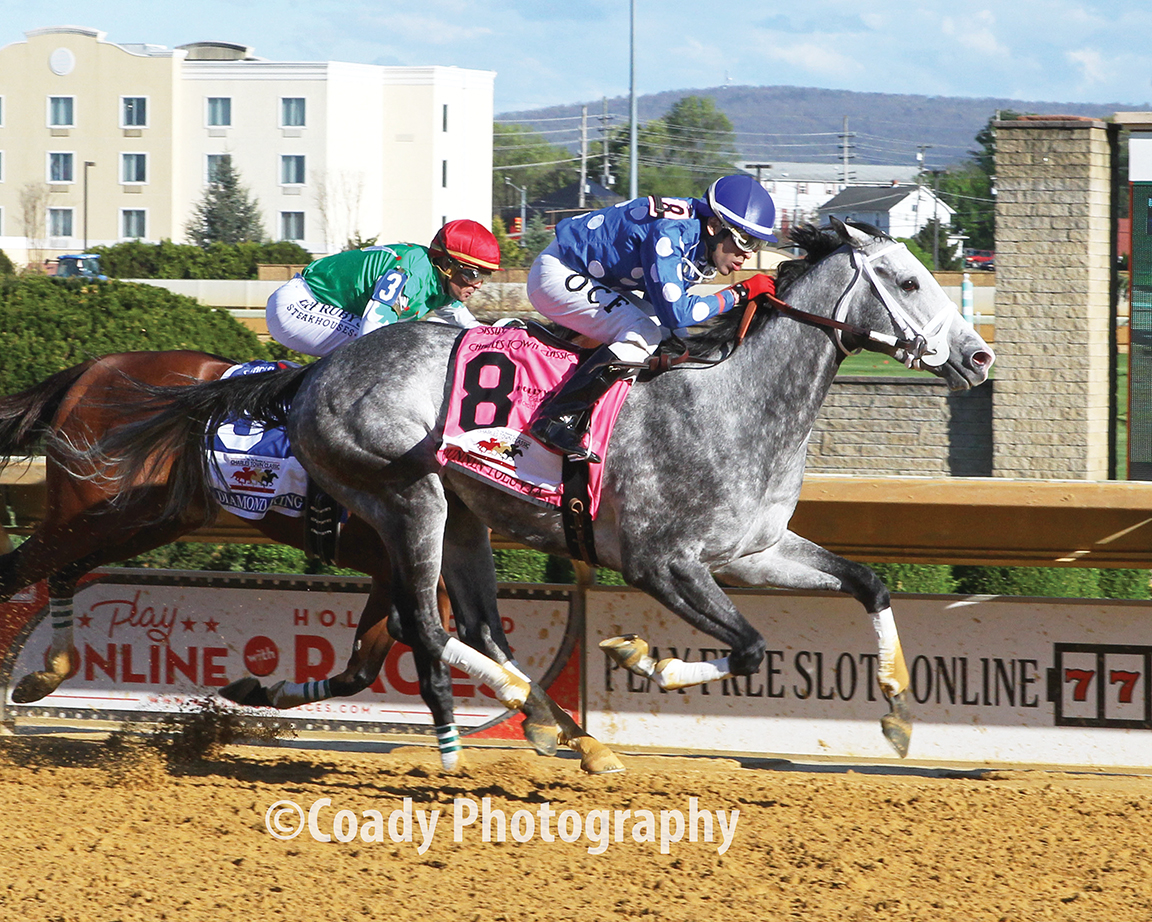 Virginia-bred Researcher won the first two editions of the Classic for Charles Town-based trainer Jeff Runco in 2009 and 2010, but in the ensuing eight years the locals who took shots at the big money failed to make an impact.

Bob Baffert, Todd Pletcher (twice) David Fawkes, Eric Guillot, Bob Hess and Jose Corrales – not exactly Charles Town regulars – trained winners such as Game On Dude, Imperative, Moreno and Caixa Eletronica. If you squinted, and drew a wider boundary, the Laurel Park-based Something Awesome won in 2018 and Pimlico-based Page McKenney was third in 2015 and second in 2016. But West Virginians couldn’t break through. In 2014, Charles Town’s Lucy’s Bob Boy finished last. In 2016, Charitable Annuity finished ninth of 10.

When the potential field for the 11⁄8-mile Classic became clearer the week before its April 20 running, there were indications a great opportunity could present itself for owner Grams Racing and 5-year-old Runnin’toluyva. The son of leading West Virginia stallion Fiber Sonde was 2-for-2 at the Classic distance, had a history of getting the early lead or being up close in all of his races, and could end up in a field loaded with horses with a history of coming from behind.

Runnin’toluvya in his previous start March 29 had won the 7-furlong stakes prep for the Russell Road Stakes, a $75,000 event on the Classic undercard. Though Runnin’toluyva had been monstrous in his 7-furlong starts, trainer Tim Grams opted to give the gelding a chance to make local racing history as the first West Virginia-bred winner of the Classic.

“You don’t want to do the wrong thing for the horse,” he said. As the days went by it seemed like the right thing to do and – in actuality – months of thought went into the decision.

“Last fall, my wife Judy and I were talking about stretching him out for the Breeders Classic because we wanted to know how he would do [at 11⁄8 miles]. When he won, at that point we started talking about what to do if we keep the big race in April in mind. Rather than bringing him to the farm, we kept him in light training to have him ready and began working him in the spring.
“With 75 nominations you don’t know who is coming, but there were about five horses nominated that [if they had entered] I would have been hesitant to run against. We saw how the race was shaping up, and [racing secretary Charlie McIntosh] told me it looks like he could get into the race and asked me if I would enter. I said, ‘Absolutely.’

The race itself couldn’t have been scripted any better. Parx Racing-based Diamond King, owned by D J Stable and Cash is King and trained by John Servis, left quickly from post three in the 10-horse field to grab the lead under Javier Castellano. Oscar Flores, regular rider for Runnin’toluvya, sent the gelding early from the advantageous post eight and was content to shadow the leader from the outside.

After a half-mile in a moderate but typical (for Charles Town) :48.25, Runnin’-toluyva engaged Diamond King while the favorite, Paul Pompa Jr.’s Rally Cry, failed to gain from a perfect stalking spot in third. Heading into the last of three turns, no other horse was making up ground on the top pair, and Runnin’toluyva battled with multiple graded stakes-placed Diamond King before inching away approaching the wire.

The winning margin was a half-length. Diamond King had 51⁄2 lengths on War Story in third. The final time was a respectable 1:50.56 on a track rated fast. 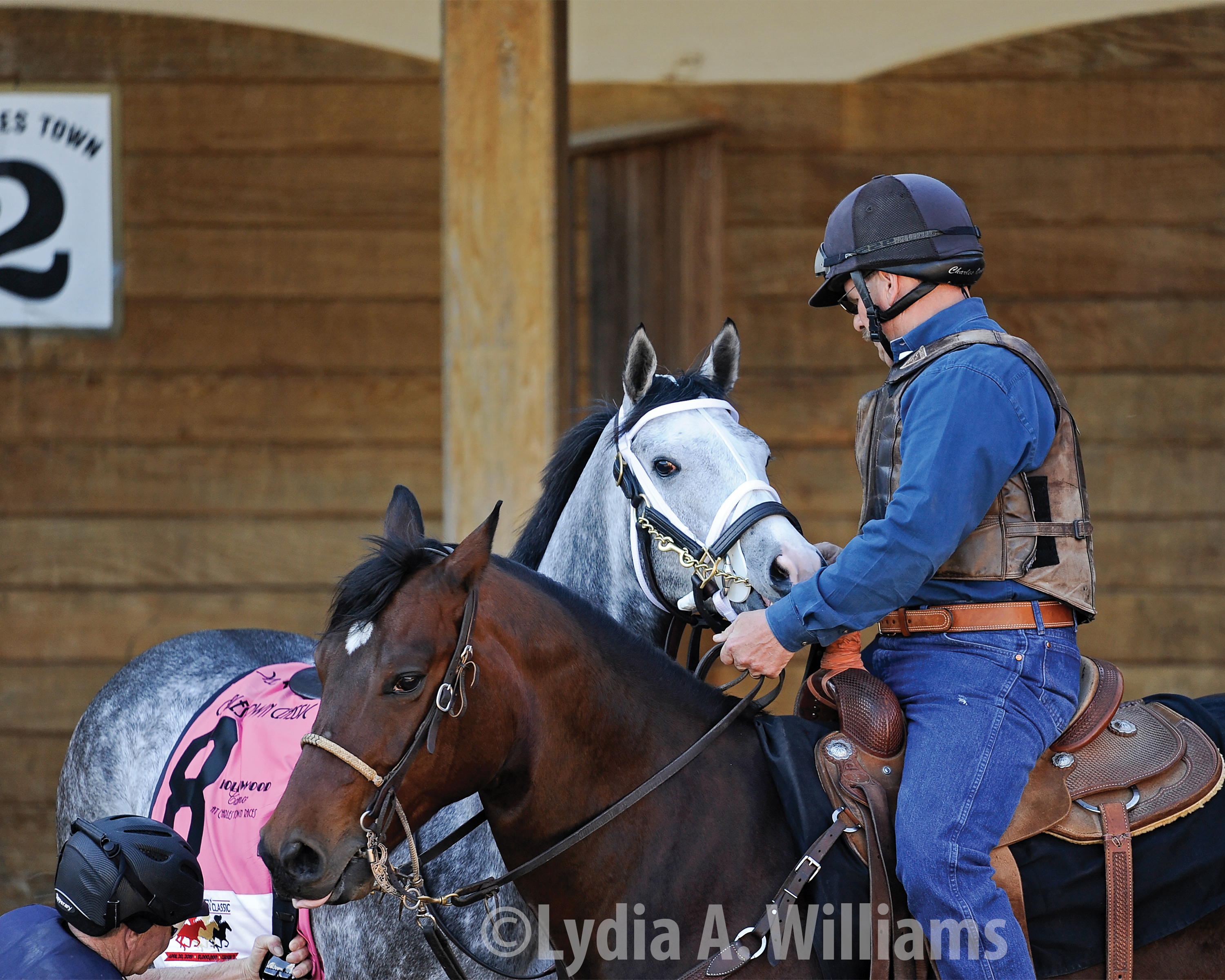 “My horse, when he had the lead in the stretch, he always gave me another gear,” said Flores, who has proven to be well aware of what he has underneath him when he’s aboard Runnin’toluyva. “When-ever I asked him, my horse just responded again. Every time I asked, he gave me more.”

Grams credited the jockey not only for his performance in the saddle, but for the knowledge he has gained by regularly working with Runnin’toluvya, who isn’t the easiest horse to handle. Grams regularly ponies the gelding before his races, and as was the case for the Breeders Classic he did so again for the Charles Town Classic.

“Oscar gets on him a lot in the morning,” Grams said. “There have been times the horse was a little tough but he always stuck with him. He knows what this horse can do and he has a lot of confidence in the horse.”

The Classic was their ninth consecutive win, and 12th together. Flores has been aboard for just two of the horse’s four losses.

Though Runnin’toluyva has done well with the pre-race ponying by his trainer, Grams frequently jokes with Flores about taking a different approach.

“Don’t change anything,” the jockey replies.

In reality, Runnin’toluyva is in charge anyway.

“This horse decides everything basically the whole time,” said Grams. “He’s respectful of you, but if he thinks he’s in charge, things get a little tougher.”

Runnin’toluyva, purchased privately by Grams Racing from his breeder, Leslie Cromer, is out of the Not For Love mare Lov’emnrun. He is the second West Virginia-bred, Charles Town-based Fiber Sonde runner to win a local graded stakes in less than a year; the other is the 4-year-old filly Late Night Pow Wow, who last September won the Grade 3 Charles Town Oaks for owner/trainer Javier Contreras, who later sold her to Breeze Easy.

Both horses are extremely popular with the Charles Town regulars, and they came not long after the retirement of West Virginia-bred Russell Road, who earned more than $2 million and won the West Virginia Breeders Classic a record three times.
The crowd went crazy when Russell Road won a big race, and such was the case with Runnin’toluvya on Charles Town Classic day.

“My wife was sitting in the grandstand and told me, ‘I’ve never heard anything like it,’ ” said Grams. “The place erupted. It was a great feeling for her. We were thinking it’s one of those things that probably won’t happen to us. We were both so excited it wasn’t funny. We were overwhelmed.”

“It just means so much to me to be able to represent the West Virginia program like this,” said Grams, who began training full-time in the mid-1990s and previously worked as an outrider and member of the starting gate crew. “I really wanted [Runnin’toluvya] to represent us well and I think he did a lot better than that. I’m just lucky to own a horse like this who steps up and seems to always do what we ask him to. We’ve put a lot of challenges on him but he has stepped up and really surprised us.”
The Charles Town Classic was worth $564,000, a massive payday for a Charles Town owner or trainer.

“I know this sounds corny but this is the best thing that has ever happened to me besides me meeting my wife 18 years ago, especially for a country boy that didn’t have anything,” Grams said. “It means anybody who walks through this gate here has a chance and that’s why this business is so great. A few days after the race, Judy said she hopes she doesn’t wake up one morning and find it was nothing but a dream. We’re both very thankful for this.”

Runnin’toluyva, who after the April 20 victory had 12 wins and two seconds in 16 starts for earnings of $913,916, is being pointed to the West Virginia Breeders Classic in October. As of early May, Grams hadn’t decided on where the gelding may race in the interim.

Meanwhile, the Grams were awaiting the career debut of the 3-year-old gelding Loving Touch, a full-brother to Runnin’toluvya also bred by Cromer. “He has got a little talent also,” Grams said.

The Grams also own a stallion, Copelan Too, the sire of 3-year-old Moonlit Night, a half-brother to the mare Moonlit Song, a multiple stakes winner. The latter, by Fiber Sonde out of the Malibu Moon mare Malibu Kitten, was bred the Gramses and has earned more than $400,000.

Moonlit Night finished first in a maiden special weight at Charles Town in April but was disqualified and placed third for interference.

“I don’t know if he’s a world-beater but he has a nice way of going,” Grams said.

Boosted greatly by more than $1 million in wagers into a Pick 6 jackpot pool with a mandatory payout, all-sources pari-mutuel handle on the 13-race Classic program was an all-time Charles Town record of $5,720,375. That’s an increase of 18 percent from the previous mark of $4,847,106 set on Charles Town Classic day in 2015 and 71.6 percent higher than the $3,332,933 wagered on the program last year.

Wagering on the Classic itself and other horizontal bets that began with the Classic was a strong $1,086,995.

On-track betting on the live product on Classic day was $277,107, which the track reported was the highest in three years.

The Russell Road – where Runnin’to-luvya might have run – went to Maryland-bred Clubman. Racing for Caonabo Stable and trainer Rodolfo Sanchez-Salomon, the winner rallied from 8 lengths down early to win by a length at nearly 10-1.
Breeze Easy and Javier Contreras teamed up to win the $100,000 Dance to Bristol Stakes with Devine Mischief. The 4-year-old filly set the pace and held on late to win by a neck at almost 14-1.

Trainer Joe Sharp shipped in with Malpais to win the $100,000 Robert Hilton Memorial for owners Richard and Connie Snyder and Brett and Billie Jo Setzer. Bred in Kentucky by the Snyders, the Hard Spun colt lived up to his even-money price and won by 41⁄4 after tangling with the likes of Kentucky Derby-G1 starter War of Will at Fair Grounds this winter.

Owner/trainer/breeder Michael Ster-ling sent Vic’s Pick to a win in the $50,000 Coin Collector for West Virginia-breds. The 3-year-old Fiber Sonde gelding caught Best Shot late to win by a half length and score his third race in as many starts this year.
No Guts No Glory Farm’s Anna’s Bandit dominated the $50,000 Original Gold Stakes for state-bred fillies and mares. The 5-year-old daughter of Great Notion drew off late as the 3-10 favorite while collecting her 10th win and going past $400,000 in earnings for trainer Jerry Robb.

Runco sent out Rockingham Ranch’s Indiana-bred Strong Like Bull to win the $35,000 Immortal Eyes Overnight Dash. The 7-year-old gelding led throughout to win for the ninth time in 19 starts. Runco also saddled Aaron’s Tap to a win in the $50,000 Confucius Say Stakes for West Virginia-breds. The 4-5 favorite made the early running and scored by 21⁄4 lengths for owner Smart Angle. 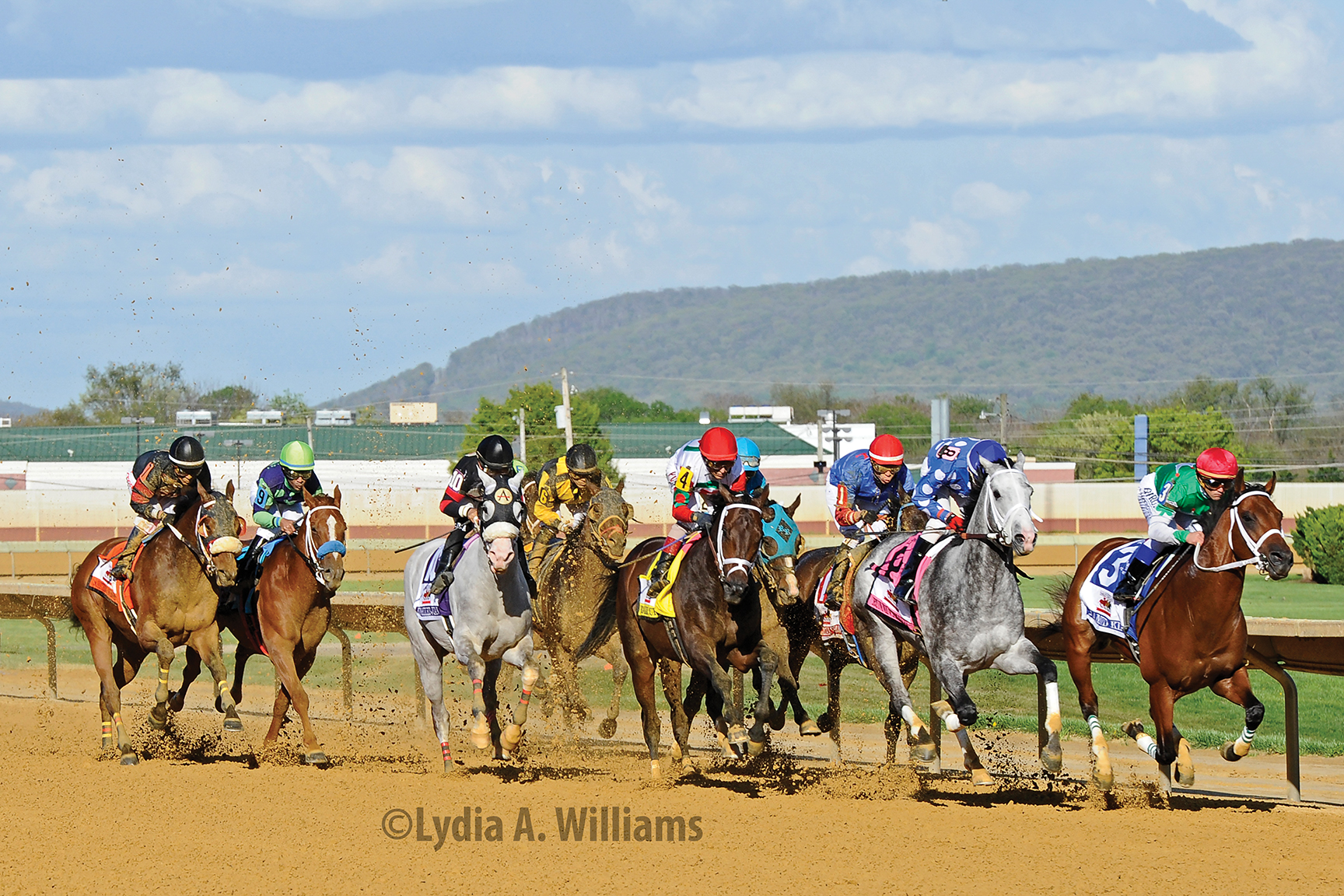