Why Timonium?: Mix of factors push May sale to new heights

Why Timonium? Hey, it’s a question. Especially when you start to think about most of the other venues for North America’s public Thoroughbred auctions – Lexington, Saratoga, Ocala, Gulfstream Park, Del Mar and so on.

Good old Timonium would not win anyone’s glitz and glamour contest, nor would the sales pavilion next to a McDonald’s capture the imagination of an equine artist or resident historian. But, there it is – as important a cog in the Thoroughbred sales engine as the Humphrey S. Finney pavilion, Newtown Paddocks or that weathervane atop the Keeneland pavilion. Never is that more evident than in May, when the 2-year-olds arrive. Fasig-Tipton’s Midlantic sale runs May 21-22, with public workouts May 15-17. The catalog includes 600 horses, up 25 over last year and pretty much the maximum for the barn area and racetrack.

The full house is one more indicator of the sale’s success.

“Success in the sales ring and success on the racetrack go hand-in-hand and people have learned they can bring a very, very, very nice horse to the Timonium sale and get rewarded for it,” said Boyd Browning Jr., Fasig-Tipton’s president and chief executive officer. “Likewise, buyers have discovered that you can go to the Timonium sale and buy a horse that can compete on the highest level anywhere in the world.”

Browning saw Timonium for the first time in 1989, so this marks his 30th year at the Maryland facility.

“The place had worked before and it goes to show you that it’s all about the quality of horses at the end of the day,” he said. “It doesn’t matter where or how you’re selling. If you can put together a good group of horses, buyers will support your sale. And Timonium looks a lot better today than it did 30 years ago in terms of the sales pavilion, the racetrack, the barn area, everything.” 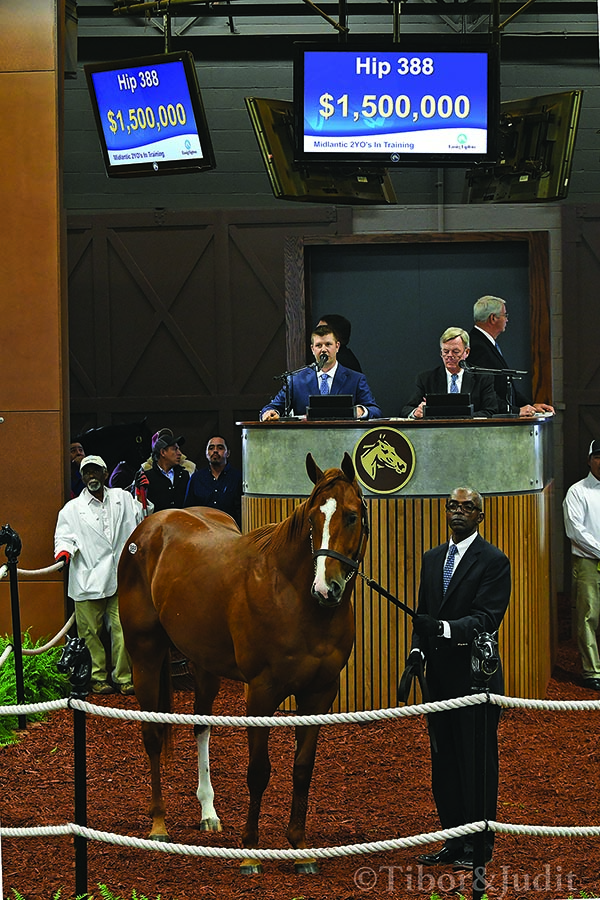 Like Browning, consignors head to Timonium with optimism and count on a mix of commerce and comfort in one form or another.

South Carolina-based Cary Frommer considers Timonium something of a home as she used to base a racing stable in the Mid-Atlantic. Now set up in Aiken as a top pinhooker of yearlings to 2-year-olds, Frommer appreciates the Fasig-Tipton crew, knows the racetrack and has loads of contacts in the area.

“It’s always been home for me,” she said. “I love buying yearlings at the Timonium sale in the fall and I love selling 2-year-olds there in the spring. It just works.”

Frommer wouldn’t come just for the atmosphere, however. Business matters, and she would have found a new venue long ago if the horses didn’t sell well. Her recent returns include an $800,000 Ghostzapper colt in 2017 and a $600,000 Medaglia d’Oro colt in 2016.

“It’s really gotten strong,” Frommer said of the sale. “It used to be you couldn’t take a horse there with too much money in it. Now if you’ve got a nice horse you paid a lot of money for you can still get a nice profit.”

Florida-based consignor Susan Mon­tanye breezes 2-year-olds for herself and others at the sales, so she knows Timon­ium’s 5-furlong track better than most.

“It is a little tricky,” she said. “You’ve got to have them set up just right. There’s a fine line, but there’s a sweet spot on that racetrack, and if you can hit that it’s smooth sailing. Because it’s a bullring, it’s easier to get them to the pole but harder to get them pulled up in time.”

Lead ponies, Montanye said, are a welcome sight for riders.

Montanye will get on about 15 horses a day during a typical breeze show, and said the experience helps her as a consignor.

“It’s fun,” she said of breezing 2-year-olds at the sales. “You get to sit on a lot of different types of horses from sprinters to two-turn horses, horses that are going to go :10 flat [for a furlong] and others that aren’t going to go as fast but that you really like.”

Timonium can be an acquired taste, for horses and humans, Montanye said. Some horses blaze around the tight turns, others have to work a little harder because of their body styles, strides or developmental learning curve. For the people, Timonium means travel expenses – where sales in Florida offer cheaper alternatives for many – but the road trip also brings a chance to see the Preakness, catch up with old friends and get some crab cakes at Michael’s or The Corner Stable.

Because of its location in the Mid-Atlantic, Timonium delivers another important opportunity – a chance to put your horse in front of a wide variety of buyers.

“I don’t necessarily have the big, big pedigrees so marketing these horses in the right place is important,” said Montanye, who sold Grade 1 winner Lady Ivanka at last year’s sale. “At the end of the day, I love Fasig-Tipton and that’s the truth. They’re a great sales company, great to work with. They’re all for helping in whatever way they possibly can. Having a sales company behind you makes you want to go.”

Florida’s 2-year-old sales season starts early, with horses prepping at the various farms and training centers. Major buyers get a chance to see horses far in advance of the actual sales, which begin in mid-March. The Ocala Breeders Sales Co. starts it off, then comes Fasig-Tipton’s sale at Gulfstream Park in late March. April brings another sale at OBS, Barretts in California, Texas, plus some English and Irish juvenile sales.

The timing works, for everybody. Later-developing horses get to the May sale on schedule rather than rushed. Others slowed by minor issues – shins, growth spurts, coughs, whatever – over the winter get time to be at their best. The date also seems to bring out a variety of buyers. Top-end players participate in every sale, but others get more involved as the year progresses – whether that’s a product of some sort of internal clock, the competition factor or economic necessity is open for debate. 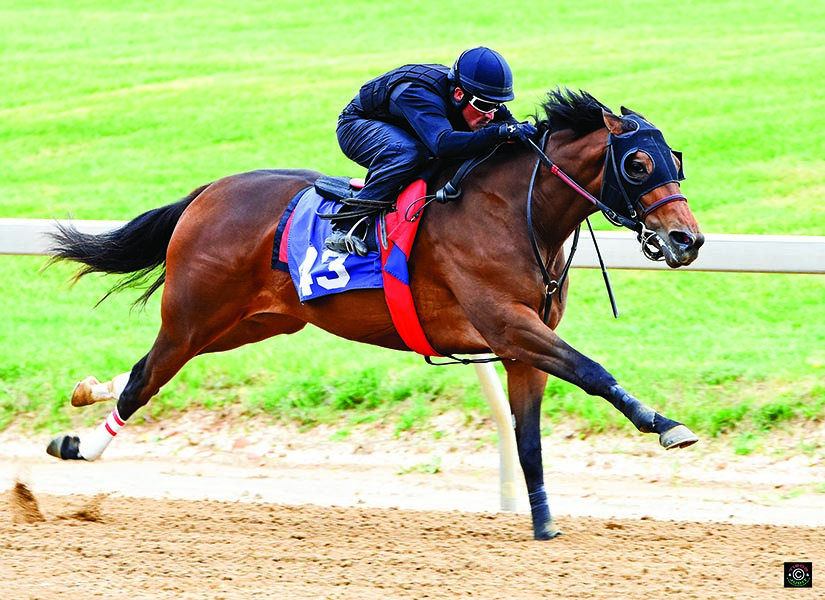 “It’s easier to get horses ready for a little bit later sale than the early ones,” said Dan Hall, of consignor and buyer Hidden Brook. “That helps, and it seems to me that we found the middle-market horses we had there last year did a little bit better than some other sales. We hope that’s the case again, because the middle market can be kind of non-existent at some sales.”

Like others, Hall appreciates the mix of buyers at Timonium every year.

“You get a lot of trainers there looking to pick up horses for owners and we’re hopeful that’s the case again,” he said. “Trainers from New York come down, the Mid-Atlantic trainers are there, you get some trainers who stay around because they were at the Preakness.”

While Frommer and some others call Timonium something of a home away from home, few people can punch with Randy Miles when it comes to a relationship with the historic track. Now based in Florida, Miles is from Virginia and was a frequent visitor to Timonium with his father Lenny (also a trainer and consignor). Back “in about 1970,” Miles was in the winner’s circle after one of his father’s 2-year-olds won at the track.

“I’d have been 4 or 5 years old so I go way back,” Miles said. Later, he worked the sales with his father. There were more steady gallops than fast workouts on the track, and nobody really knew how fast the horses went.

“Those were the good old days,” he said with a laugh. “It was different. It is home. That’s where I cut my teeth. I will always have a fond place in my heart for Timonium.”

Miles has been in Florida for about eight years, first with Live Oak Plantation, and now as a consignor. The chance to come back “home” is only part of the reason he puts Timonium on his calendar.

“If you keep selling good horses, people start shopping and we’ve had tons of good horses come out of there,” Miles said of the business side of the sale. “People feel like the dirt track might give them an advantage at selecting horses. It’s later in the year so you might feel like you know what you’re getting when you look at a horse. The location means there are a lot of trainers there, it’s a combination of things that helps the buyers. A lot of people target that sale now and it’s because of the buyers who are there.”

And the buyers are there because of the horses. Timonium produced its first million-dollar horse in 2015, and responded with another in 2016 and last year’s all-time record of $1.5 million paid by John Oxley and Breeze Easy for Curlin’s Honor.

“From the buying side, we’ve always been there shopping,” said Hidden Brook’s Hall. “Our 2-year-old consignment deal is relatively new for us, but we’re there because [Timonium] has worked for us as buyers.” 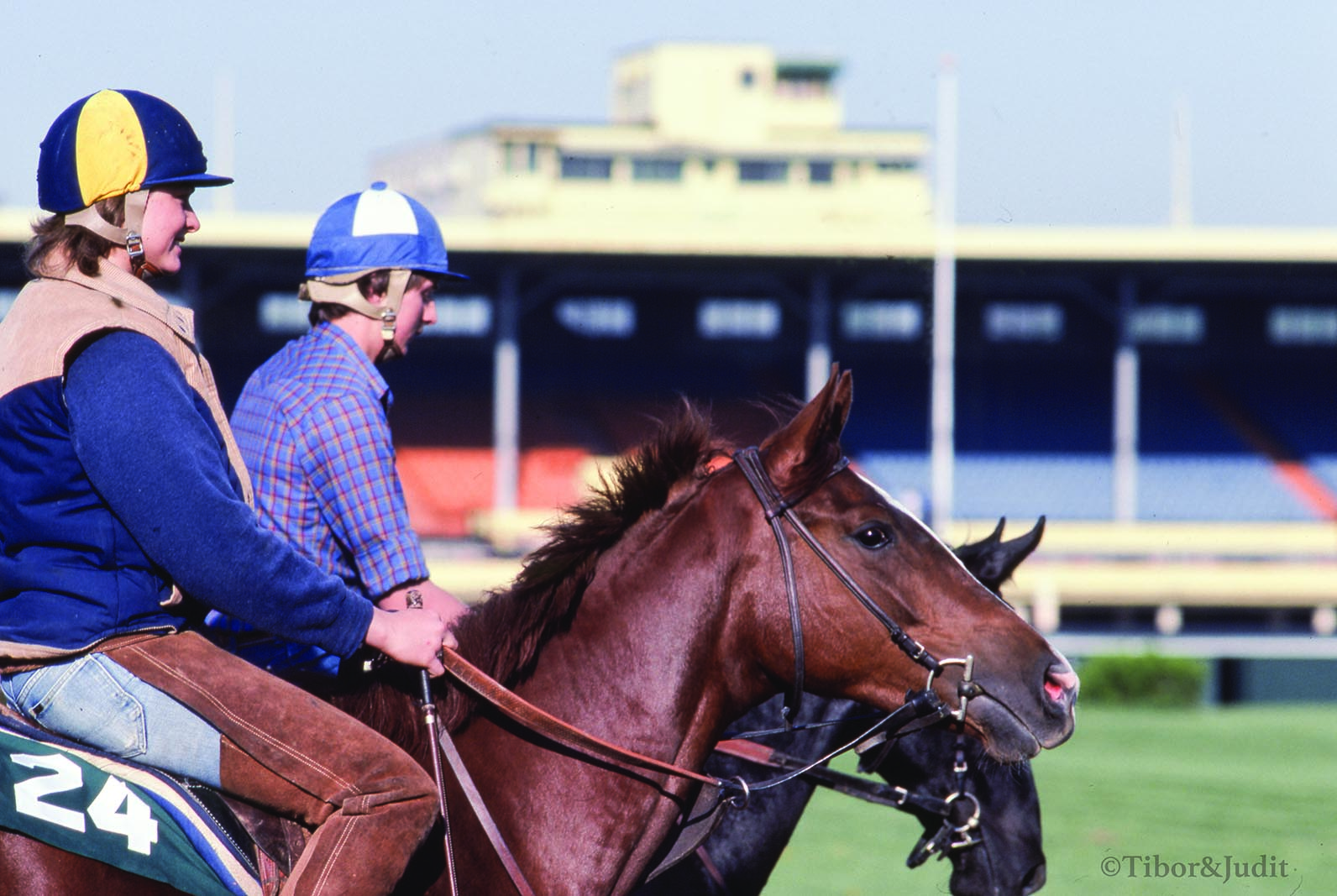 Sign up for the MidAtlantic Club to view this article in our digital edition for FREE. See this story in print by subscribing at a special MidAtlanticClub price by clicking here.