Horsemen often seek a little divine intervention when it comes to the health and success of their Thoroughbreds. It can come through prayer, a rosary hung from a rear-view mirror, a small statue or picture in a tack room, or even a St. Christopher’s medal tucked under a saddle, like classic winner Smarty Jones often carried. 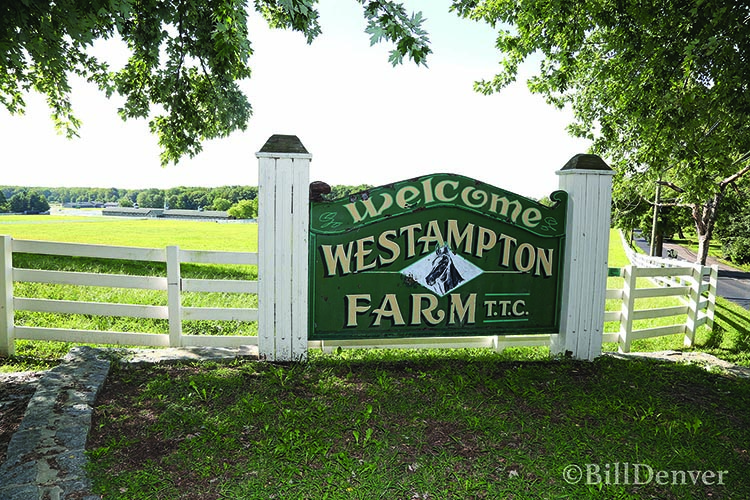 At Westampton Farm in Westampton Township, N.J., that call for God’s grace is boldly on display. On the far side of the five-eighths mile training track stands an immense white cross, several feet high, which seems to cast a heavenly shadow on the daily goings-on.

The cross isn’t the only religious symbol at bucolic Westampton, a green swath of more than 110 acres in what used to be a prime farming region of Burlington County, just across the Delaware River from Pennsylvania. A large statue of the Virgin Mary, sheltered in a wooden crèche, faces the long barn closest to the training track, immediately noticeable on the Westampton main drive.

“That’s the reason we’re all here,” said Ernesto “Ernie” DeNofa Sr., the owner of Westampton Farm, when asked why he had erected the infield cross. As DeNofa talked, a melody of late-morning sounds could be heard: Canada Geese calling to each other as they flapped their wings in the infield pond; the squawking of Blue Jays in a nearby stand of trees, just starting to turn colors in the early October weather; the clop-clop of distant hoofbeats, and the neighing of a bay horse from one of Westampton’s many white-fenced paddocks.

“It’s a religious thing,” DeNofa continued. “Hopefully we all understand that there’s someone above everything. And I’m a big fan of the Blessed Mother. I’ve met [the late] Pope John Paul II four or five times, so that’s my next statue for the farm, I want to get one of Pope John Paul. People might think I’m crazy but, hey, it’s my farm. When I get a statue of the Pope, I’ll be good.”

Divine or not, the farm holds firm as a rural outpost just east of the New Jersey Turnpike (exit 5) and bordered by housing developments and two golf courses. A Cracker Barrel is 3 miles away. The Burlington Center Mall, about 5 miles. From a racing perspective, Westampton is about 60 miles from Monmouth Park and just west of all sorts of horse operations and the distinct Google Maps ovals of racetracks current and past. Seven miles away, Helis Stock Farm dates to the 1870s when it was called Rancocas Farm and owned by Pierre Lorillard IV (who owned Parole and Iroquois among others). Rancocas, which featured indoor and outdoor training tracks, later belonged to Harry Sinclair, who raced Hall of Famers Grey Lag and Zev among others. Further east, the area also includes the Standardbred operations Joie de Vie Farm and Melander Stable (the former home of the legendary trainer/driver Stanley Dancer) among others.

DeNofa, who lives in Huntington Valley, Pa., has been involved with Westampton for more than 20 years, beginning with several partners. When the partners sold out, DeNofa gladly became the sole owner, at first employing different managers to oversee the operation while DeNofa tended to his other business, the Philadelphia-based Molly Construction, a concrete company founded in 1987. Now 68, DeNofa has turned Molly Construction over to his son while focusing on Westampton. 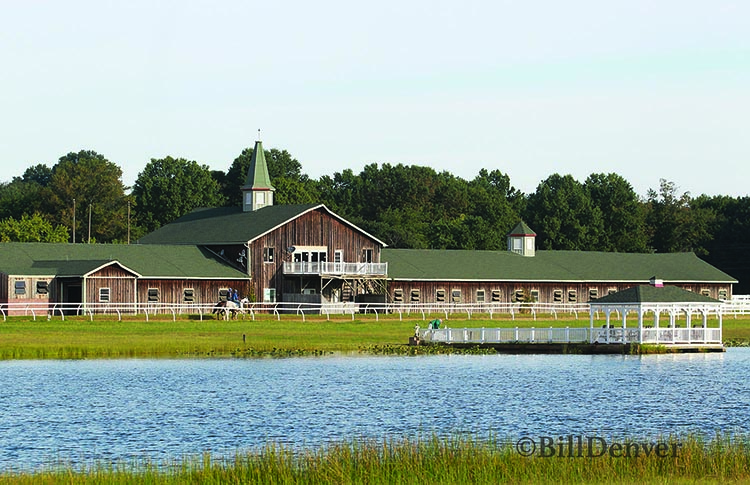 “Originally, when we purchased the property, we were going to keep a piece of it, like 10 acres, for a gentleman’s farm and maybe develop the rest of it,” said DeNofa. “But one thing led to another thing and we’re still here. We want to serve the industry with this farm. We’d rather not develop it.

“I love this area near the farm,” he said. “I’m an empty-nester now; the kids are all married, so probably in the next year or two I’ll be thinking about relocating out here.”

Like many people who become interested in racing, DeNofa caught the bug through the involvement of his family.

“My whole family loved the sport – my father, my late brother was a handicapper at old Liberty Bell, Atlantic City and Garden State for years and years,” he said. “They had a couple of horses over the years but were more into betting and going to the track than being owners. They liked ‘the action,’ as we call it.”

Westampton, formerly known as the Mount Holly Training Center, offers plenty of amenities for horsemen. Aside from its quiet, peaceful atmosphere, it has 180 stalls spread over several barns, numerous Eurociser exercise machines, indoor and outdoor hotwalking machines, an indoor swimming pool, an epsom salt bath and new vibration platform, as well as 24-hour video security and the opportunity for horsemen to turn their horses out daily in the many surrounding paddocks.

The farm got a big boost as the base for Bernie and Kate Dalton, the husband-and-wife jockey and trainer team who brought a small string of horses north from Camden, S.C., for the summer. Steeplechase horse Diplomat, trained by the Daltons for Flying Elvis Stable, finished third in the rush. You can take your time, especially with a horse that may need more time. The horses are calmer, and a lot of people do very well off the farm. And we’re centrally located to many of the Mid-Atlantic tracks.”

The current stall rate at Westampton is $300 a month, or $10 a day. DeNofa points out that not only do trainers get a stall, tack room, and use of all the facilities, but depending on the size of the operation can get housing for the help.

DeNofa is constantly improving the facilities, most recently installing an all-new filter system in the pool. His current project is refurbishing the main barn nearest the track. 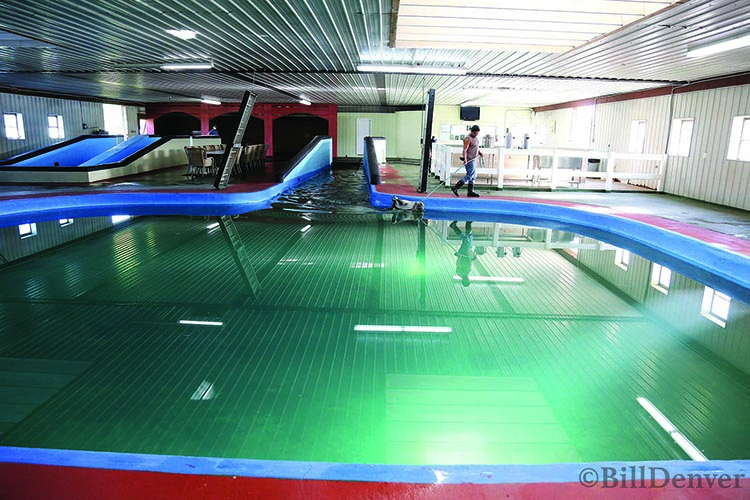 “We’ve laid rubber block footing down in the aisle, and we’re putting in all new rooms for the help,” he said.

The farm isn’t limited to horses in training or those on layoffs. DeNofa pointed out that there are mare-and-foal stalls, and that a stallion, Lord of Cat, even stood there at one time.

Among the trainers stabled at Westampton are Joe Orseno, Patrick McBurney and Jaime Mejia; Chuck Simon and his wife Paula lived in one of three houses on the property, which are available to rent, for several years. 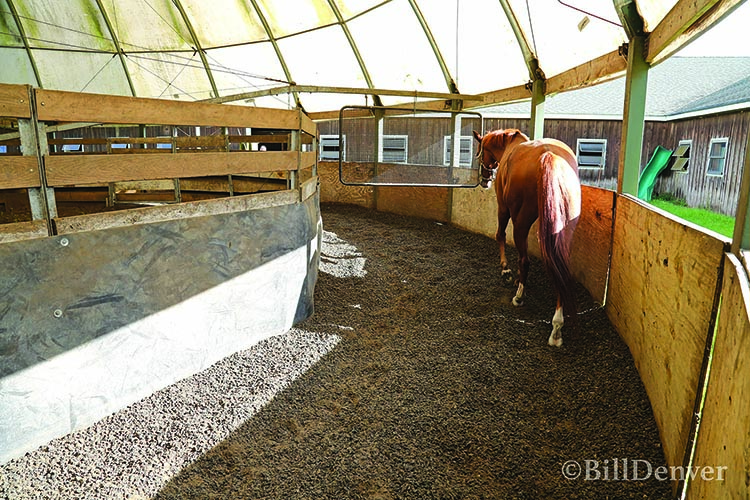 “I really enjoyed being there,” said Simon, who has since moved his base to Florida’s Palm Meadows. “It’s a centrally located facility. Because I lived there, I could walk to work and could turn my horses out right outside my house. It’s a step up from being at a racetrack.

“It’s one hour to Monmouth, about a half-hour to Parx Racing, and not a bad trip to Delaware or New York,” said Simon. “There are round pens, a good track surface, a swimming pool, and lots of advantages and features outside of a racetrack. And I liked that the barns are enclosed, keeping you out of the elements.”

Westampton is a sanctioned training center, with official workouts appearing on Equibase. While in years past trainers that had been suspended from racetracks came to Westampton, DeNofa said that is no longer the case. If he finds out a trainer has been ruled off elsewhere, he asks them to leave the farm.

“We’re sanctioned now, so we have the same rules as the racetrack,” he said. “So if someone’s ruled off the track, they can’t be here. But sometimes someone will be ruled off and we don’t know it, and then when we do, we have to tell that person to leave. We’ve had a couple of incidents where people have seen my kindness for weakness.”

In the meantime, horsemen who want a change of pace from the everyday hustle and bustle of the racetrack can find it at Westampton Farm. With its central location, reasonable rates, and plethora of amenities, it has much to offer in a quiet little corner of Burlington County.