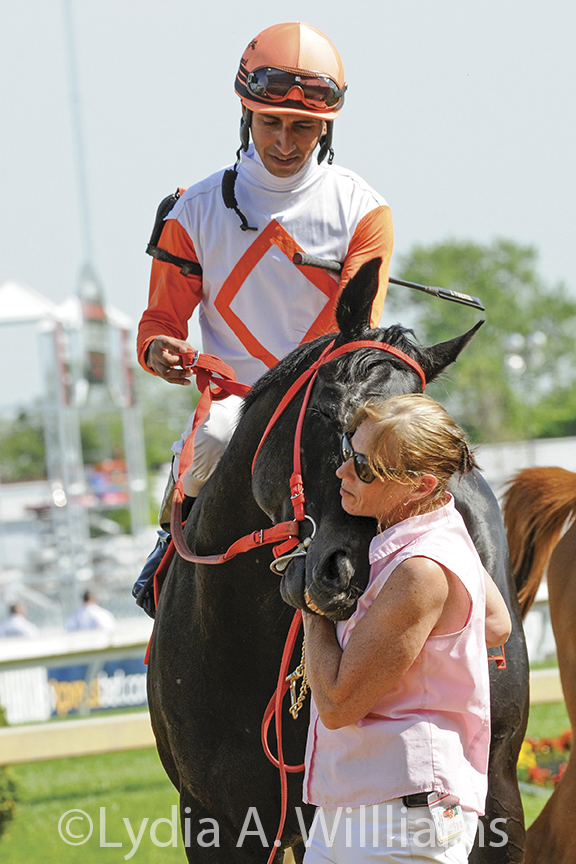 Turned loose. All those times Ben’s Cat had risen like a ravenous black wave, gathering, menacing, consuming what hindered his path. His late-rushing gusto turned witnesses breathless and exhilarated, the outcomes confirming him a natural phenomenon.

Turned loose. In the surreal shadows of stall 28, King Leatherbury’s Laurel Park barn, Fern Augusti made one last round on a warm June Wednesday turned stifling by its consequence. She ducked under the webbing, as she’d done a thousand times across nine years as his groom, prettied Ben’s Cat’s forelock and embraced him. It was time to let go.

Leatherbury, his breeder, owner, Hall of Fame trainer, had read three recent off-the-board finishes as word his prize homebred had had enough. The reckoning: With 26 stakes wins (32 overall), 48 third-or-better runs from 63 outings, $2.6 million earned and four Maryland-bred Horse of the Year titles, Ben’s Cat’s had sufficiently burnished his ledger and legend.

The following day, June 28, word came that Ben’s Cat would leave the barn altogether that evening for Christine Welker’s Spring Ridge Farm in Versailles, Ky. Retirement brought surprise, relocation a blindside. “We were all pretty much in shock,” Augusti said.

The thought of Ben’s Cat’s graceful steps into a trailer that would land him somewhere else marked a threshold Augusti couldn’t cross. “He got a big hug before I left work that day,” Augusti said. “I told him goodbye.” She paused. “My last one.”

She wrapped the front ankles of Zippity Gal, a compliant bay, and looked up, her green eyes with a burst of brown about the pupils suddenly glassy. “He was my four-legged soulmate,” she said.

Something happened the day Ben’s Cat shipped to Laurel with the other 2-year-olds, Augusti said, a moment born of fathomed serendipity. “I knew it,” she said. “The minute I stepped on the van . . . I was like, ‘I want him.’ There was just somethin’ about him. I was in love immediately.”

The unfolding months only deepened the wonder and sweetened the tale. When a fractured pelvis landed Ben’s Cat extended stall rest, Augusti said the young gelding managed it like an old sage. “You don’t find many 2-year-olds that are stall-bound for six months that never got bad in the stall,” she said. “He was always a gem.”

Consistently docile, kind, and mannerly, Ben’s Cat evolved in other ways. “At first, when he started runnin’, everything would scare him walkin’ over, and I had to be lookin’ for anything that might spook him,” Augusti said. “I mean, cameras, everything. Then he got the point, it was like, ‘Hey, they’re here to take my picture,’ and he’d stop and pose for everybody. He got to be a pure ham.”

He welcomed peppermints and carrots and Mrs. Pasture cookies, shunned apples, kept a tidy stall but for two select spots he chose to soil, shipped reluctantly, developed an affected saddling-paddock walk that Augusti called “The Zenyatta” and often spent long periods presiding over morning exercise as the right honorable Baron of Laurel.

“As soon as you came down the track, he would stand at the gap, and I could stand there for 10 minutes or more,” said Elizabeth Eckert, who replaced longtime exercise rider Doug Leatherman this year. “He loved to watch horses breeze. So Saturdays were his big day. He would come out. We’d walk a couple steps, pull up, look. I could put my hands down, drop my reins, he would not flinch. I had a horse come up right underneath me; Ben just picked his head up, let him go by. He did not move. So, when he stood out here, everybody moved around me. They’re like, ‘Aw, don’t worry about it; this is Ben’s racetrack.’ ”

Ben’s Cat had last hit the board Aug. 20, 2016, six starts previous. He finished third that day in the Mister Diz Stakes, a turf sprint he’d won every year from 2010 through 2015. Eckert said she heard the whispers that Ben’s Cat had lost a step, but she didn’t feel it.

After a winter at rest, Augusti said, Ben’s Cat returned to Laurel this year renewed and invigorated. “I kinda thought after last year that he didn’t really want to do this anymore,” she said. “But when he came back again, he was ready to go.”

Nothing had changed. Ben’s Cat would let out a holler when Augusti arrived from her Thurmont, Md., home, and rub his head on her head, back and shoulder as she did him up or prepared to leave the stall.

“He and I were in sync; that was my boy,” she said, tearing up. “He was such a kind and loving horse. I mean, I have dogs, cats. I don’t know – there’s just somethin’ about horses that makes them the most special of all.”

“I called him my black beauty. A few little white hairs on his forehead, which you could barely see unless you were close enough to him. He always just shined and sparkled. And he had that sparkle inside.”

Body, sure, but a groom knows too the contours of a horse’s mind and heart. Augusti also rubbed retired stakes winner Ah Day, whose hard-wired ways got him noticed on the track and in the barn. Ben’s Cat knew how and when to turn it off.

“I swore when Ben retired, I was retirin’, and here I am,” Augusti said. “There are days like this when I think, I can’t do this anymore. But if I’m not taking care of them, I feel like I’m abandoning them. ”

Don’t fall in love with a horse, the old grooms cautioned, wise to the notion that the most able groom might discern a horse’s secrets in her strong and caring hands, but not the day she’ll have to turn him loose one last time.

Eclipse Award-winning writer Vinnie Perrone, who covered racing at The Washington Post for more than 10 years, is a regular contributor to Mid-Atlantic Thoroughbred.