A Belmont Dream with the Masters

Cot Campbell walked into the track kitchen at Aiken Training Center, went behind the counter, poured himself a cup of coffee and found a seat. More disappointed than an abandoned basset hound, the master of Dogwood Stable had just watched Palace Malice run in the Kentucky Derby and needed some advice. 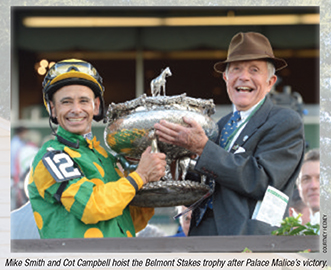 But where would he turn? If only the Aiken legends were still around. Campbell would ask them what to do, how to turn such a dismal performance into something positive. Campbell had partners to answer to, a reputation of excellence to uphold. What he wouldn’t do to talk to some of the guys from the old days – men like Angel Penna Sr., John Gaver, Woody Stephens, Mack Miller, Buddy Raines, Mike Freeman, Frank Wright. They spent their winters and more in the South Carolina town and built training careers with confidence, patience, worry, work, luck, strong opinions and steadfast convictions.

Campbell swirled his coffee, drank half in one pull and thought about them, his horse, a life as a founder of the whole concept of racing partnerships. Founded in 1969, Dogwood campaigned dozens of stars over the years, won the 1990 Preakness with Summer Squall, captured Eclipse Awards on the flat and over jumps and has been honored on any number of levels. But, boy, Palace Malice sure ran a stinker in the Derby for trainer Todd Pletcher–sprinting like Usain Bolt to an early lead, setting fast fractions and fading to 12th while wearing blinkers for the first time. How do you confidently step forward after that?

“The blinkers were a terrible mistake, and I was enthusiastic about them beforehand,” Campbell said aloud to no one, himself. “What do I do now? I can’t run him back in the Preakness, not off that performance.

Do you think we can make the Belmont?”

Campbell swore the place was empty when he walked in, but a chair creaked and a distinguished gentleman softly cleared his throat.

“They don’t run ’em as often as we used to, but if he’s got good energy and if you stay away from those damn blinkers and he trains kindly, put him in the entries. But. . . every time I’ve been unsure as to whether or not to run I’ve done better when I did not.”

And then he was quiet. The calm, rational, sage advice (with an out) came from Miller. He’d trained for decades, teaming up with Rokeby Stable and others to produce the likes of Sea Hero, Java Gold, Assagai, Winter’s Tale, *Hawaii and *Snow Knight. Campbell listened, let it soak, took another sip from his mug. When he turned to respond, Miller was gone.

In his place sat Penna, the Argentine master and another Hall of Famer whose career included victories in his native land, Venezuela, France, England and the United States by such standouts as Allez France, Bold Reason, Waya (Fr) and Relaxing.

With an anguished look that all but shouted “I understand,” Penna threw his arms in the air and cut loose with a torrent of unintelligible advice, though Campbell thought he heard something about Allez France and blinkers. Then Penna stormed out the screen door, off to think about his horses.

Before the door closed, in walked Gaver. The Hall of Famer and Princeton graduate worked for the famed Greentree Stable and conditioned such stars as Tom Fool, Shut Out, Capot and Stage Door Johnny. Gaver took a similar approach to Penna, only with fewer words (and more English).

“I’m busy with my own stock,” he said, after collecting a cup of coffee, and headed to the barn.

In both cases, Campbell got the message. While standing up to get another cup of coffee, he was surprised to see Stephens. The Kentuckian grabbed the pot and a mug, told Campbell to sit, and poured. He also spun yarns about Bald Eagle, Blue Man, Devil’s Bag and all the rest. In the 1980s, Stephens won consecutive Belmonts with Conquistador Cielo, Caveat, Swale, Creme Fraiche and Danzig Connection.
He had simple advice.

“I won five Belmonts, one of them five days after winning the Metropolitan Mile. Run him. Hell, tell Pletcher to work him a sharp five-eighths six days out. That’ll get his mind back on the game.”

Though he could have predicted the response, Campbell laughed and filed it away. Stephens went outside, climbed aboard Rex the lead pony and trotted off toward the track.

Just then longtime Aikenite Raines pulled up in a classic, restored Pierce Arrow. As a boy, Raines was given away by his parents to a horse trainer. As a young man, Raines galloped Cavalcade. Later, he won a Preakness with Greek Money and trained champion Open Fire.

“Well, you sure as hell don’t want the Preakness in two weeks,” Raines said. “Give yourself time to regroup. He’s bred for the Belmont. If you love the way he’s training, run him; if not, wait for Saratoga.”
Raines brushed some racetrack dirt off his shoes, told a story about a runaway horse in an indoor track, and left for a lunch date with Betty.

Hungry now, Campbell thought about ordering eggs but settled for more coffee. The advice had helped. He was more confident. Legends will do that to you.

He was about to call Pletcher when in walked Freeman. Another with a deep connection to the South Carolina town and a deeper resume, he trained the great Shuvee and thought back to his days with a big stable.

“If I were training him for Alfred Vanderbilt, he’d damn sure run in the Belmont,” Freeman said. “. . . If he was bright and bouncing, that is.”

Wright followed Freeman and brought with him a long career on both sides of racing. He was a trainer and a CBS television commentator who covered Secretariat’s Belmont win, and Seattle Slew’s, and Affirmed’s. He’d also worked the match race when Ruffian broke down. Predictably, he didn’t waste words.

Yes it is. Campbell knew it before his dreamy breakfast stop, knew it even more afterward.