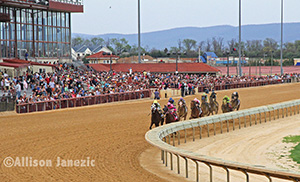 And, now, Charles Town is the place Shared Belief lost.

The world’s best racehorse–according to the Longines international rankings system–shipped to West Virginia for the $1.5 million Charles Town Classic-G2 April 18 and wound up leaving in the horse ambulance with a fractured hip. The result had nothing to do with Charles Town, and more to do with happenstance, but nevertheless dampened a bright, cheery, warm day at the races. Management moved its signature race to daylight hours for its seventh running, and got paid back with a strong field, a record handle figure and an enthusiastic crowd. 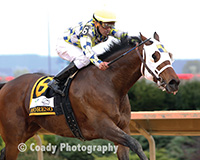 Southern Equine Stable’s Moreno walked off with $852,000 in purse money by adding another determined effort to his career list. The 5-year-old gelding came in with just three wins in 25 starts, but one victory came in the Grade 1 Whitney last summer at Saratoga. He’d also finished second or third another 12 times and placed in such races as the Travers-G1, Pennsylvania Derby-G2, Suburban-G2, Woodward-G1 and Santa Anita Handicap-G1.

Trainer Eric Guillot sent Moreno to Charles Town last year and he wound up third after jumping shadows from the light poles. Otherwise, the son of Ghostzapper loved the place. He races on or near the lead early in his races, wears blinkers and can be a “looky-loo” according to his Louisiana-born trainer. While taking some horses out of their games, Charles Town’s 6-furlong oval is different enough to keep Moreno focused.

“You take Shared Belief out, and [Moreno] is the best horse in the race,” Guillot said. “Bullrings are notorious for speed. I told [owner Mike Moreno], it’s an eighth-of-a-mile stretch, if we have any chance of beating Shared Belief, it’s here. Moreno won’t know where the wire is, he’ll just come off that turn and keep going. ‘Where am I? Am I working in the morning, or what?’ ” 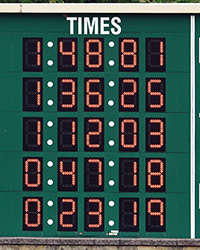 The 7-1 third choice in a field of nine, Moreno let longshot Warrioroftheroses set the early fractions, but took control after a half-mile in :47.18 and was never challenged while winning by 2 lengths for jockey Cornelio Velasquez. Last year’s winner Imperative, dismissed at 31-1, finished second with multiple Mid-Atlantic stakes winner Page McKenney, 33-1, third.

Sent off at a little more than 1-5, Shared Belief slipped and stumbled leaving the gate to end up last, gathered himself and passed one horse by the first time through the stretch but was pulled up on the backside by jockey Mike Smith. Veterinarians diagnosed swelling around his right stifle at first and a scan later revealed a fractured right hip.

Shared Belief would have had to run to catch Moreno, who covered the distance in 1:48.81 to break Researcher’s track record by almost a second. Bred in Kentucky by Southern Equine, the winner needed 10 starts to break his maiden but has run in nothing but graded stakes since. He passed $2.9 million in career earnings with the Charles Town score.

The victory helped ease some of the sting of a tough end to the 2014 season, where Moreno lost all chance when caught up in the melee at the start of the Breeders’ Cup Classic-G1.
Moreno had off-season ankle surgery to remove three chips, and launched his 2015 campaign in the Grade 1 Santa Anita Handicap going 11?4 miles March 7. He led throughout, but got passed by Shared Belief in the stretch and settled for second. Three weeks later, at Fair Grounds in New Orleans, Moreno shortened up a furlong and finished third–beaten a half-length–in the New Orleans Handicap-G2.

Then came Charles Town, a win and some crowing from his talkative trainer.

“Look at his form, go back and look–did I dodge any of the dances last year?” Guillot said. “He’s well-bred, he’s a good horse.”

“I don’t over-train him,” Guillot said. “I never drain the gas tank. I put back in what I take out.”

And Moreno gives it back. 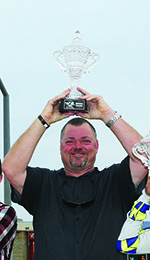 “I told my jockey to ride him like he stole him and the posse is chasing you.”
On his instructions to Cornelio Velasquez before the Charles Town Classic

“I can ship one to the moon, and not let the gravity be a side effect.”
On the various places he runs his horses

“You know she’s going to crop you out, don’t you?”
To a fan who posed for a photo taken by his wife

“Sure, you like X’s? That’s all I know how to do. I’m from Louisiana. Check the spelling. I hope your ink pen has automatic.”
To another fan who asked for an autograph