On a Roll: Blofeld’s success spurs excitement at Murmur Farm 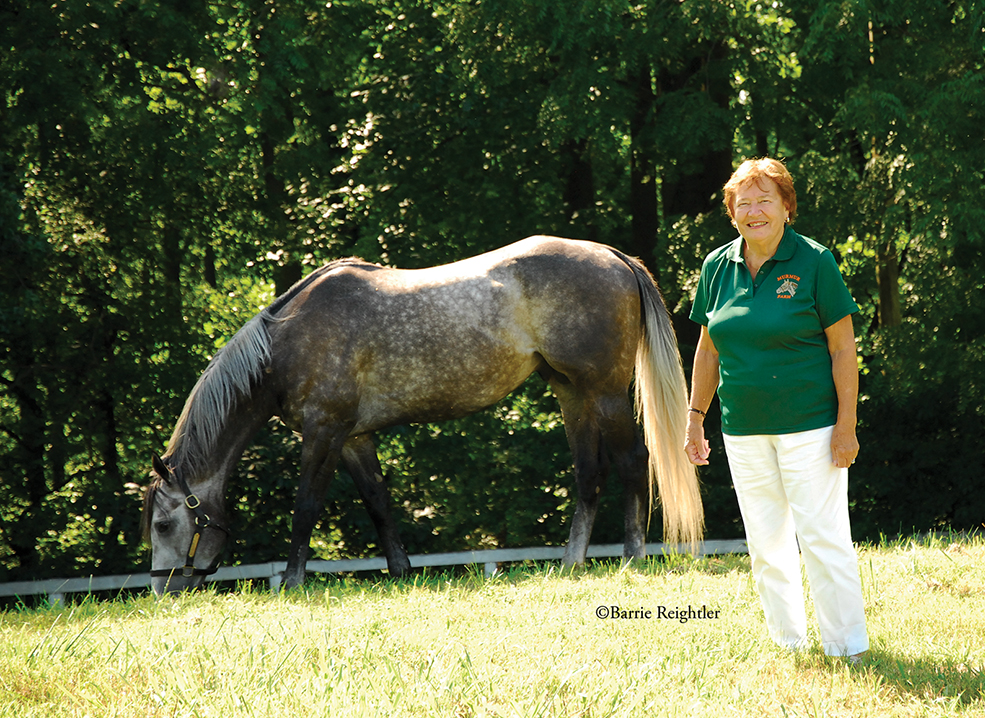 “I’m not really a gambler,” Murray said of the risk behind plunking down a few dollars based on a horse’s chances to win a given race.

“I would say you are,” he replied. “Picking out these studs, putting all this money into them and hoping they can make it. That’s gambling.”

Murray bet on Blofeld in 2017, and might be holding a big ticket as the young stallion rocketed through the early months of 2022 with 12 winners from 13 starters in his first crop through March 13. The success charged the early breeding season at Murmur, a 131-acre family farm in Darlington, Md., with a lengthy record of stallion success.

“It’s been kind of quiet for us for a few years and now to have something exciting happen is good,” said Murray. “It’s so hard to stand a new horse, it’s expensive, risky.”

With $370,086 in progeny earnings, Blofeld was 10th on the North American list of second-crop sires thanks to that gaudy 92.3 percent winners-to-starters ratio. Of course, 2-year-olds had yet to start in 2022 so the leaderboard actually measures first-crop performance and Blofeld was up there with Mastery (38 starters), Midnight Storm (32), Gormley (41), Keen Ice (59), Unified (38) and American Freedom (48). Fellow Marylander Divining Rod was a few spots behind Blofeld with $318,667, but got there with 25 starters. Blofeld led all second-crop sires in average earnings per starter with $28,468. The 12 winners were fifth on the list – behind Cupid, Classic Empire, Keen Ice and Practical Joke (each with more than triple the starters).

All the statistics call to mind spring-training batting averages, with the small sample sizes and the potential for sudden swings in either direction, but there’s no disputing Blofeld’s quick start and growing list of admirers.

“I’m getting calls every day about sending mares,” Murray said. “People that were debating are now breeding two mares to him. One person wants to breed five mares. We’re getting a lot of action. It’s exciting.”

She even said she turned down a couple offers to sell Blofeld outright, preferring to keep Murmur in the stallion business. Started by Audrey and her husband Allen in 1961, Murmur is in its second location and counts among its stallion history the likes of Norquestor, Deerhound, Our Emblem and Louis Quatorze. Allen Murray died in 2013, but Murmur continues and has stayed loyal to the mission of developing young stallions who appeal to Mid-Atlantic breeders. Blofeld fit the model after a 14-start racing career. The son of Quality Road won all three races (two graded stakes) as a juvenile, ran just twice as a 3-year-old, won the Gulfstream Park Handicap-G2 at 4 and then lost his next seven. The $225,000 2-year-old purchase owned by JSM Equine and the Greathouse family’s Glencrest Farm might have been a borderline stallion prospect for Kentucky. He fit for Maryland, especially with the female family behind him.

“I was looking for a stallion and I had followed him a little bit when he was racing and then he won that big race at 4 and I felt like I was never going to get him,” Murray said. “We made an offer and they took it and then the Quality Roads started hitting big time.”

Murray appreciated the business, and is proud of her horse, but also knows there’s a long way to go.

Blofeld got on the board in October when Crabs N Beer became the stallion’s first winner in a $20,000 maiden claimer at Delaware Park. The next month, Blofeld sired two winners on the same day when Gamestonks and Royal Spy won at Laurel Park Nov. 26. The success started early and kept coming this year with five wins in January and seven in February. Improbably, he hit another daily double when Gamestonks and Charming Way won at Laurel Feb. 26.

“There’s some luck to it, but a stallion has to earn it and he’s clearly doing it this year,” said George Adams of Housatonic Bloodstock. “[Twelve winners from 13 runners], I don’t care how short the time frame is, that’s an incredible number. The foals on the ground are nice, he’s gorgeous, they’re running on the track. It’s kind of fascinating.”

Adams’ clients bred two mares to Blofeld the first year. One didn’t get in foal. The second produced Blo My Budget, a maiden special weight winner at Penn National for Wasabi Ventures Stables Feb. 16. Adams expects to send three or four mares this year. It’s a long way from his first exposure to the horse.

“I was at the Timonium yearling sale the year before he entered stud and saw his stallion register page tacked to a stall door and it caught my eye,” Adams said. “He was an interesting horse as a stallion prospect, and I hadn’t heard anything about him being retired let alone coming to Murmur. He fit right in with the other good, young stallions to start here lately – Imagining, Bourbon Courage, Mosler, Divining Rod, the horses Northview [Stallion Station] has brought in.

“One of these young stallions needs to step up. Great Notion won’t be around forever. I thought it was going to be Golden Lad for a while and it still might be. Divining Rod is making some progress. Why can’t it be Blofeld? He needs a black-type horse or two at some point, but clearly they’re hitting their stride.”

As if on cue, New Jersey-bred Beach Daze finished second in a stakes at Parx March 8 to give Blofeld his first black-type runner.

Virginia-based trainer Madison Meyers knows that first-hand after Maryland-bred Charming Way won at Laurel Feb. 26. The Melissa Cantacuzene homebred finished second in her debut in December and again Jan. 28 (behind another Blofeld filly, Miss Casey) before breaking through to complete a Blofeld late double started by Gamestonks for trainer Brittany Russell one race earlier.

“When she arrived, I was not familiar with Blofeld and Melissa is a shareholder so I was like, ‘OK, I need to know a little more about this horse,’ ” Meyers said. “Quality Road . . . my dad used to be business partners with the Greathouses . . . Gamestonks I noticed because I deal with Brittany a little bit. Then hers won and ours won the next race.”

Meyers liked Charming Way from the start, as much for her attitude as anything else.

“Great brain, lovely to watch train from day one,” she said. “She has done a lot of growing and developing, and changes often. She’s got a strong personality, everything has to be on her terms on the ground, but racing-wise or training-wise she’s versatile enough, patient and does whatever you want her to do.”

Meyers has a 2-year-old colt in her barn at Middleburg Training Center, too, and likes what she sees. The trainer also expects the Blofelds to adapt to longer races, too.

“I can’t wait to stretch mine out,” she said of Charming Way. “The only reason I shortened her up in her second start [6 furlongs to 51⁄2] was because we got hit with some hard weather and ran out of the shedrow. We decided to run if we couldn’t get a strong work into her and she ran great. His 3-year-olds, people are running short because of the condition book probably. I would guess a lot of them would be stretching out.”

Murray flies the Blofeld banner on the racetrack too as the owner/breeder of 2021 winner Royal Spy and 2022 winner Goldenize.

The latter is the first winner for Murmur mare Golden Innis, a full-sister to Murmur’s five-time stakes winner Celtic Innis. While nobody is predicting that kind of a career – nine wins, 24 placings, $648,638 earned – for Blofeld’s babies just yet, Murray will gladly go along for the ride as owner, breeder and stallion owner.

“We were driving home one day after winning a race, Allen and I, and I asked ‘What do people do for excitement that don’t have racehorses?’ ” she said of a day in the past with her husband. “That’s still the way I feel. There are a lot of down days, but we try to enjoy the good days and good moments.”